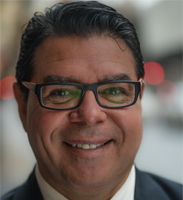 Aden Ridgeway was born in Macksville in northern NSW in 1962. He is a proud member of the Gumbayyngirr people. His life has seen him rise from the treadmill of poverty and growing up on an Aboriginal reserve. His early experiences have resulted in strong family traditions and he is the very proud father of two adult sons and a younger daughter.

He attended boarding school at St John’s College, Woodlawn, and left in 1980. He has been a park ranger, court assessor, chief executive officer and federal politician.

Aden is the first Indigenous person to be elected as a Parliamentary Leader when he held the position of Deputy Leader, Australian Democrats, during 2001-02. He retired as a Senator for NSW having served in the Federal Parliament for six years.

SKILLS & WORK EXPERIENCE : Aden spent 14 years in the NSW Public Service working his way from park ranger through policy positions to management. During this time he served on the Sydney ATSIC Regional Council for its first two terms.

OTHER : Currently the Patron of The Centre for Aboriginal Independence and Enterprise and the Saltwater Freshwater Festival.

Aden also works as a consultant to various organisations, including the NSW Aboriginal Land Council and Maari Ma Aboriginal Health Corporation in addition to his mainstream consultancy work to various government departments and corporations.